For viral predators of bacteria, sensitivity can be contagious 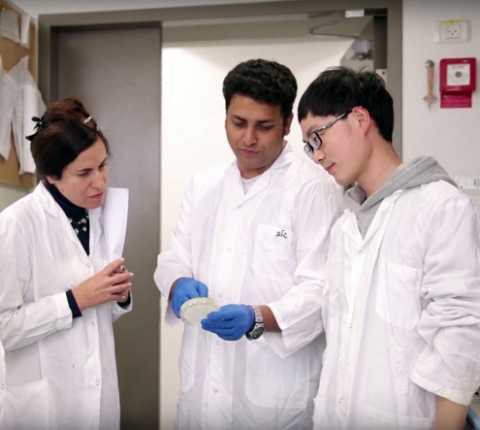 Prof. Sigal Ben-Yehuda and colleagues at the Department of Microbiology and Molecular Genetics, Institute for Medical Research Israel-Canada, in the Hebrew University’s Faculty of Medicine. (Photo: Hebrew University)

Bacteriophages (phages) are probably the most abundant entities in nature, often exceeding bacterial densities by an order of magnitude. As viral predators of bacteria, phages have a major impact on bacterial communities by reducing some bacteria and enabling others to flourish. Phages also occasionally package host DNA and deliver it to other bacteria, in a process known as horizontal gene transfer (HGT).

The biology of phage infection has been extensively studied since the beginning of the 20th century. However, the fate of phages in complex bacterial communities resembling their natural ecosystem has not been studied at the cellular level. To investigate the biology of phage infection in complex bacterial communities, researchers followed phage dynamics in communities harboring phage-resistant (R) and phage-sensitive (S) bacteria, a common scenario in nature.

Now, in new research to be published in the January 12 edition of Cell, researchers at the Hebrew University of Jerusalem’s Faculty of Medicine provide the first demonstration of a mechanism by which bacteria entirely resistant to a given phage become susceptible to it upon co-incubation with sensitive bacteria.

VIDEO: A video about this discovery can be seen at https://youtu.be/YQLvTBCsOtM.

The researchers show how phage-sensitive bacteria harboring phage receptor can deliver the receptor to nearby phage-resistant cells that lack the phage receptor, via a molecular transfer they call “acquisition of sensitivity” (ASEN). This process involves a molecular exchange driven by membrane vesicles (MVs), in which phage-resistant cells transiently gain phage attachment molecules released from neighboring phage-sensitive cells. By exploiting this novel delivery system, phages can invade bacteria lacking their receptor.

The researchers further posit that this mechanism enables phages to expand their host range and deliver DNA into new species, thus facilitating the attachment of phages to non-host species, providing an as-yet unexplored route for horizontal gene transfer (HGT).

“In the present study, we show for the first time how bacteria entirely resistant to a given phage become susceptible upon co-incubation with sensitive bacteria. Phage invasion into resistant cells could have a major impact on transfer of antibiotic resistance and virulence genes among bacteria. This aspect should be carefully considered when employing phage therapy, as phage infection of a given species may result in gene transmission into neighboring bacteria resistant to the phage,” said Prof. Sigal Ben-Yehuda, who led the research at the Department of Microbiology and Molecular Genetics, Institute for Medical Research Israel-Canada, in the Hebrew University’s Faculty of Medicine.

“Our work indicates that, similarly to the remarkable arsenal of entry and spreading strategies employed by viruses, phages utilize alternative, as yet unidentified spreading mechanisms, which could expedite the infection process and promote phage spread within cells of the same and different species,” said the PhD student Elhanan Tzipilevich, who carried out this research.

The Institute for Medical Research-Israel Canada (IMRIC), in the Hebrew University of Jerusalem’s Faculty of Medicine, is one of the most innovative biomedical research organizations in Israel and worldwide. IMRIC brings together brilliant scientific minds to find solutions to the world’s most serious medical problems, through a multidisciplinary approach to biomedical research. More information at http://imric.org.

FUNDING: This work was supported by the European Research Council Advance Grant (339984) awarded to Sigal Ben-Yehuda.