“The Order of Merit recognizes Prof. Ben-Sasson’s outstanding, extensive, and personal commitment to German-Israeli relations in the field of science, and thus to the cooperation between our two nations.” 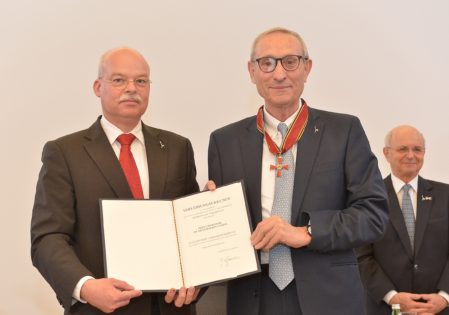 “The Order of Merit recognizes Prof. Ben-Sasson’s outstanding, extensive, and personal commitment to German-Israeli relations in the field of science, and thus to the cooperation between our two nations,” said Dr. Clemens von Goetze, the Ambassador of the Federal Republic of Germany to Israel.

The Order of Merit is the highest tribute the Federal Republic of Germany can award to individuals and is the only honor that may be awarded in all fields of endeavor. The Order of Merit may be awarded to Germans as well as foreigners for achievements in the political, economic, social or intellectual realm and for all kinds of outstanding services in the field of social, charitable or philanthropic work.

“I thank the President of Germany for this high honor. It is a tribute to the many researchers, students and administrators at the Hebrew University, who for two generations have advanced research, student exchanges, and daily cooperation with German institutions,” said Prof. Menahem Ben-Sasson, President of the Hebrew University. “In every interaction with Germany there is an element of introspection. We must never forget the Holocaust, its victims, and its perpetrators; yet this memory also unites us in a common dutyto remember the past, to educate accordingly, and to use science and research to create a brighter future for humanity. To this end we will continue to grow our academic and research relations with Germany.” 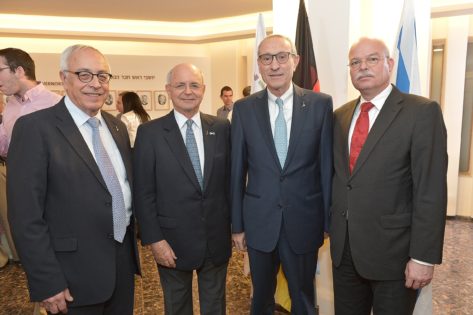 From the Hebrew University, Ambassador Yossi Gal, Vice President for Advancement and External Relations; Mr. Michael Federmann, Chairman of the Board of Governors; and Prof. Menahem Ben-Sasson, President; with Dr. Clemens von Goetze, the Ambassador of the Federal Republic of Germany to Israel.

The Association of University Heads of Israel, representing the heads of Israel’s research universities, said: “The Association of University Heads of Israel congratulates Prof. Menahem Ben Sasson on receiving the Order of Merit on behalf of the President of the Federal Republic of Germany. In his capacity as president of the Hebrew University, Prof. Ben-Sasson promotes collaborations with leading academic institutions around the world and is a model for promoting academic research in Israel.”

Germany is now considered the Hebrew University`s most significant research partner in Europe, second worldwide only to the US. Cooperation is based on scientific excellence, bringing together top scientists in a wide range of joint research projects, as well as a growing number of students from both countries. Among the many collaborations are the Max Planck Center for Sensory Processing of the Brain in Action, the Martin Buber Society of Fellows at the Hebrew University, several Minerva Centers, and recently the Fraunhofer Project Center for Cybersecurity in Jerusalem.

Even before diplomatic relations were established between Israel and Germany, there were connections between students and faculty at the Hebrew University and Freie Universität Berlin. The first official partnership between the universities was formalized in 1986, and since 2011 they have been working together as strategic partners, with numerous projects in the natural and social sciences and the humanities, as well as programs for student exchange and the promotion of young researchers. In 2015, the two universities signed an agreement to launch a joint doctoral program, the first of its kind between German and Israeli institutions.

Prof. Ben-Sasson is the thirteenth president of The Hebrew University and is currently serving his second four-year term in office. Prior to serving as president, Prof. Ben-Sasson was a Member of the Israeli Knesset, where he served as Chairman of the Knesset’s Constitution, Law and Justice Committee, and headed the Knesset Lobby for Higher Education. Prof. Ben-Sasson is a scholar in the Department of the History of the Jewish People in the Faculty of Humanities. A historian of the heritage of Jews in Muslim Lands, he has written some forty books and scholarly articles. He has served as President of the World Union of Jewish Studies, Vice-President of the Memorial Foundation for Jewish Culture, Chairman of the Ben-Zvi Institute for the Study of Jewish Communities in the East, and on the board of directors at Yad Vashem. He is married and has three children and six grandchildren. A full bio is available at https://new.huji.ac.il/en/page/454.

The Hebrew University of Jerusalem, Israel’s leading academic and research institution, is ranked among the top 100 universities in the world. Founded in 1918 by visionaries including Albert Einstein, Sigmund Freud and Martin Buber, the Hebrew University is a pluralistic institution where science and knowledge are advanced for the benefit of humankind. For more information, please visit http://new.huji.ac.il/en.