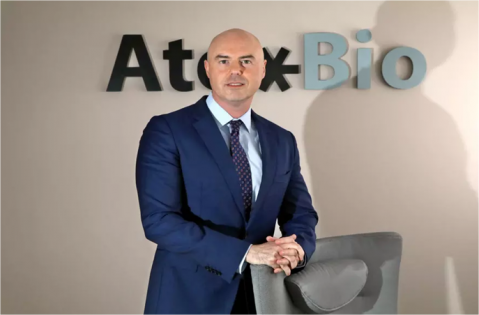 Dan Teleman, the CEO of Israeli pharmaceutical start-up Atox Bio, is helping to prepare one of the first drug treatments for flesh-eating bacteria.. (photo credit: Courtesy)

The drug is undergoing a Phase Three clinical trial this year and if all goes as planned, the life saving drug could be available by 2020.

For patients suffering from flesh-eating bacteria, Israeli biotech start-up Atox Bio is set to transform how doctors and hospitals treat the infection – by targeting how your immune system responds.

Atox Bio’s drug, Reltecimod, may be the first drug to market in helping treat patients with this type of condition.

Tens of thousands of people suffer from necrotizing soft tissue infections, which kill the body’s soft tissue in the skin, muscles and ligaments, among other places. A major problem is that the body’s immune system often overreacts, destroying its own tissues and leading to organ failure and possible death. The infection is rare in healthy people but once the bacteria enters the body, it spreads quickly.

To fight the infection today, doctors remove the destroyed tissue during multiple surgeries, which can sometimes lead to amputation, along with doling out antibiotics.

“If we are successful, this would be the first product ever developed for this devastating condition,” Atox Bio CEO Dan Teleman told The Jerusalem Post. “Reltecimod can help this patient population. It works on the patient’s immune system and we suspect it would reduce systemic disease that can lead to multiple organ failure, and in extreme cases even death.”
The drug – which is a peptide, or a small protein – works by targeting the immune system’s T-cells, and in doing so prevents the patient’s body from overreacting to the infections. Reltecimod helps regulate cytokines – proteins emitted by the immune system which alert when there’s infection, which restores the body’s appropriate immune response.

The drug is undergoing a Phase Three clinical trial this year and if all goes as planned, Reltecimod could be available by 2020.

In December, the firm announced that it raised $30 million to help advance the clinical development of Reltecimod. With those funds, the drug’s prescribed use could one day include treating acute kidney injuries (AKI), which is a major unmet clinical need.

AKI involves inflammatory processes in the kidney, which can lead to a permanent reduction of kidney function and is also associated with an increased risk of death, extended hospitalization, and increased medical costs. Atox Bio plans to initiate a Phase Two clinical study during 2018 for treating AKI.

With Reltecimod, AKI patients would possibly no longer need to hook up to cumbersome dialysis and rely on supportive care.

Based in the central town of Ness Ziona, Atox Bio also has an office in Chapel Hill, North Carolina. The start-up was founded in 2003 by Hebrew University professor Raymond Kaempfer and Yissum’s Dr. Gila Arad.

Reltecimod has already received orphan drug status from the US Food & Drug Administration and the European Medicines Agency, along with obtaining Fast Track designation. That enables quicker testing and development of the drug.

The current Phase Three trial is being held at 60 trauma hospitals across the US, totaling some 290 patients. Its results should be ready in 2019. A previous Phase Two study, held at seven US trauma sites, had 40 patients receive a single dose of either Reltecimod or a placebo.

The latest investment round was led by Arix Bioscience, with participation from Adams Street Partners, Asahi Kasei Corporation and other unnamed investors. Previous investors were SR One, OrbiMed, Lundbeckfonden Ventures, Becker and Integra Holdings. To date, the company has raised some $60m.