American business leader and philanthropist Mortimer Zuckerman announced today the launch of the Zuckerman STEM Leadership Program, a transformative initiative designed to support future generations of leaders in science, technology, engineering and math in the United States and Israel and, over time, foster greater collaboration between two of the world’s most advanced scientific research centers. 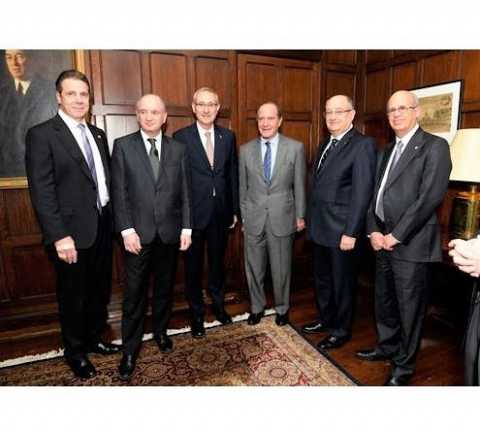 The Zuckerman STEM Leadership Program will give the highest-achieving American post-doctoral researchers and graduate students the ability to collaborate with leading researchers at Israel’s top research institutions — the Hebrew University of Jerusalem; the Technion-Israel Institute of Technology; Tel Aviv University; and the Weizmann Institute of Science — which are among the world’s most advanced.

By providing American graduate students and post-doctoral researchers with exposure to Israel’s renowned cutting-edge research and startup culture, the Zuckerman STEM Leadership Program will raise a generation of academic, scientific and industry leaders in the United States infused with a unique spirit of entrepreneurship and innovation. The program will simultaneously bolster Israeli research institutions as world-leading centers for cutting edge research by providing Israeli institutions access to large-scale funding needed to develop top-tier research labs, projects and programs.

“At a time when collaboration is essential to advanced scientific research, this program gives the next generations of leading American and Israeli academics the ability to work together on cutting edge research in ways that stand to benefit their fields for years to come,” said Mr. Zuckerman. “The result will help transform not just the work of the scholars involved, but the way the United States and Israel approach collaboration and cooperation across the sciences.”

“Mort’s friendship is demonstrated yet again through this important initiative,” said Prime Minister of Israel Benjamin Netanyahu. “Together with the Technion, The Weizmann Institute, The Hebrew University and Tel Aviv University, this project will help bring back home some of Israel’s most brilliant sons and daughters, allow them to advance their own careers here and in so doing contribute to Israel’s growing scientific excellence. It will also enable some of America’s brightest young scientists to conduct their research in Israel.

“New York and Israel share a deep and unparalleled connection – and the Zuckerman Scholars Program is a prime example of how we can keep that relationship strong today and in the future,” said New York Governor Andrew Cuomo. “By helping some of America’s best and brightest students work and learn alongside leading researchers in Israel, this program gives us a new model for cooperation and partnership that will ultimately better society as a whole. This is a great way to strengthen the bond between Israel and the Empire State, and I applaud Mort Zuckerman for launching this program today.”

“Science is the only language with no borders or limits; it belongs to all,” said Prof. Menahem Ben-Sasson, President of The Hebrew University of Jerusalem. “The new Zuckerman initiative will strengthen connections between two important academic communities, North America and Israel, at a critical juncture – that where a new generation of scientists begin their careers, who will develop with roots firmly planted in the best institutions in both regions and will continue throughout their careers as catalysts for collaboration, enriching both Israeli and North American science and advancing knowledge for the benefit of humanity.”

The Zuckerman STEM Leadership Program will be supported by funding from Mr. Zuckerman’s foundation to inaugurate the program and ensure that the first class of Zuckerman Scholars will begin with the 2016–2017 academic year. The foundation’s long-term intent is to ensure that the Zuckerman Scholars and the program’s related educational activities continue in perpetuity. In the next twenty years alone, the program intends to provide over $100 million in scholarships and related educational activities that will benefit not only the participating scholars and universities, but the general public as well.

The Zuckerman STEM Leadership Program will, over time, help strengthen the U.S.-Israel partnership as Zuckerman Scholars return to the United States after building long-lasting relationships based in mutual collaboration. Israeli academic leaders returning to research institutions in Israel will similarly advance the overarching collaborative effort in science between the two nations as they continue to build bridges with their American colleagues.

The Zuckerman Scholars Program will initiate with the two main tracks: (1) the Postdoctoral Scholars Program, which is open to highest-achieving postdoctoral researchers from the United States to pursue research at leading Israeli research institutions; and (2) Zuckerman Faculty Scholars, which is designed to support Israeli academic leaders by fostering world-class labs, programs and projects at the Israeli institutions.

Additional information on the program, including how to apply, is available through the program’s website at http://zuckerman-scholars.org.