The Australian Friends of the Hebrew University Honours the Jerusalem Quartet

Friends of the Hebrew University honour Jerusalem Quartet in Perth

On Tuesday 13 September the world famous Jerusalem Quartet gave a single performance at the Perth Concert Hall. The performance was hosted by Musica Viva Australia. A dedicated and enthusiastic crowd enjoyed their fine music and the atmosphere of this renowned Group.
The WA Friends of the Hebrew University of Jerusalem (WAFHU) were privileged to be included in this event. The efforts of Lindsay Lovering, WA state manager of Musica Viva, and Lindsay Silbert, a long time supporter of WAFHU made this event possible. It is planned that Musica Viva and WAFHU will develop an ongoing MOU facilitating special rates for WAFHU members for future concerts.
Following the performance,WAFHU hosted a cheerful gathering at the Duxton Hotel, to welcome the Quartet members to Perth. The Quartet members signed the case of an antique violin body that had been salvaged and restored. The violin was auctioned and the proceeds of the sale will be divided between the two organizations.
It was very heartening to meet and see so many new faces at this joint function of which this is but the first. It is a good example of when there are synergies in organizations; much is to be gained by mutual collaboration. Musica Viva’s foundation by Paul Morawetz (1914-2001), an Austrian refugee forced to flee his native Austria after the Anschluss in March 1938, had been instrumental in the early years of the Jerusalem Quartet’s rise to fame. This evening’s event was a tribute to his enthusiasm and vision.
Peter Winterton
President WAFHU
14th September 2016 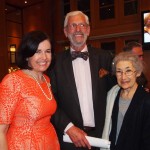 From L to R: Anne Last with Lindsay & Suzy Silbert 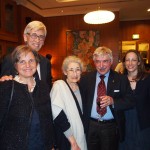 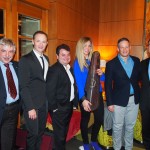 From L to R: Peter Winterton with the Jerusalem Quartet and Haylie Ecke 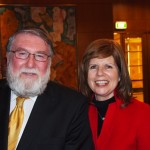