This last week has seen a plethora of activity in Perth by Israel’s preeminent university, the Hebrew University of Jerusalem.

The weekend of 9/10 November saw the honouring of long-standing HU benefactors, Harry and Sylvia Hoffman at a special dinner attended by both national and state leadership of the Australian Friends of the Hebrew University. This was followed by the organisation’s state and federal AGM’s on Sunday 10 November.

Rob Schneider, National CEO of the Australian Friends stayed on in Perth for the week during which time he met with various stakeholders including donors, alumni, potential students as well presenting an illuminating lecture on man and nature in Israel to the “Living in Retirement” group. The week culminated with the arrival in Perth of Professor Ehud Cohen, Director of the Brain Disease Research Centre at the Hebrew University.

On Sunday 17, Professor Cohen addressed a packed hall at the Maurice Zeffert Home on new findings in his area of speciality, Alzheimer’s and dementia.

In a fascinating expose’, Professor Cohen stated that by altering the progression of ageing, it might be possible to postpone, and perhaps even prevent, the onset of neurodegeneration. He said that for decades, the manipulation of ageing was not considered to be possible, however, during the last three decades it had become apparent that ageing has genetically regulated aspects that are amenable to manipulation. A chemical inhibitor is expected to set the basis for the development of future treatment that holds great promise for patients and their families.

In his vote of thanks to Professor Cohen, Rob Schneider stressed the importance of mutual collaboration. He mentioned that an agreement promoting the exchange of students between the Hebrew University and the University of Western Australia was recently signed and that thanks to the generosity of John and Debbie Schaffer and their family and Ian and Jillian Green and their family, the program would be able to assist a greater number of students in a two-way exchange program.

Rob also expressed the thanks of the Australian Friends to the WA leadership headed by State Chair Peter Winterton and to dynamic PRO, Yael Jacobson for all their hard work in keep the Hebrew University flag flying in the West.

A short video was screened highlighting the achievements of Israel’s most well known University and the only Israeli University featured in the top 100 universities of the world. Rob spoke of plans to establish a Centre for Computational Medicine at the Hebrew University – the first such centre in Israel that will bring the best of technology and human intelligence together to help find solutions to some of the world’s most challenging medical problems. He invited all present to support the amazing medical research and innovation at the Hebrew University through tax deductible donations to Hebrew U Health Promotion. Donations may be made via https://austfhu.org.au/donations-bequests/donation-online/

Rob also announced that thanks to the support of an anonymous sponsor, people who are prepared to leave a bequest to the Hebrew University could enjoy a free, all expenses trip to Israel coinciding with Yom Haatzmaut in 2020. Details of this Legacy Mission can be found on the Australian Friends website www.austfhu.org.au or direct link https://austfhu.org.au/living-legacy-mission-2020/

The duo of Professor Cohen and Rob Schneider flew from Perth to Melbourne on Monday 18 where a series of collaborative workshops will run with the University of Melbourne for the rest of this week. 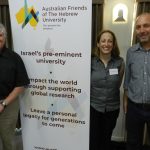 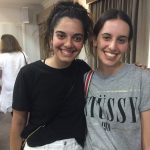 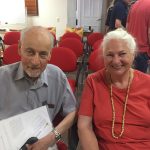 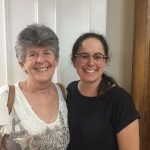 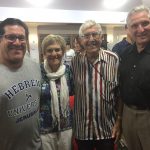