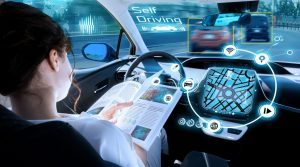 This Technology Helps Self-Driving Cars See Well In All Weather

This article originally appeared in ISRAEL21c by Brian Blum.

When a self-driving Uber struck and killed a pedestrian in Tempe, Arizona in 2018, it marked the first time autonomous vehicle technology was involved in a fatality and set off warning bells across the nascent industry.

Industry insiders and concerned legislators asked: Are self-driving cars ready to be tested on real streets? How can the technology be improved to avoid devastating collisions?

Self-driving cars “see” through a variety of high-tech cameras and sensors attached to the vehicle. But even the best cameras can get tripped up in dark or inclement conditions.

Israeli startup TriEye is bringing to the consumer car market a dashboard-mounted SWIR (shortwave infrared) camera that can successfully navigate through snow, fog, dust and rain.

SWIR cameras have been around for several decades, deployed primarily in the military. “But they were too expensive to be used in mass-market applications,” Ziv Livne, TriEye’s VP of product and business development, tells ISRAEL21c.

TriEye’s technology is based on 10 years of research conducted by Prof. Uriel Levy, head of the nano-photonic lab in the department of applied physics at the Hebrew University of Jerusalem.

Levy had been looking for ways to bring the price of SWIR cameras down by getting them to work using CMOS semiconductors. Those are the kinds of silicon chips used by most digital cameras today, rather than the much more expensive semiconductor technology – it’s called InGaAs – powering most SWIR cameras.

InGaAs stands for indium gallium arsenide, a chemical compound that doesn’t occur naturally in nature. That makes it harder to manufacture and commercialize. As a result, even a low-resolution InGaAs-based SWIR camera can cost over $20,000.

Putting a SWIR camera on a CMOS semiconductor reduces cost “by a factor of 1,000,” Livne explains. Levy’s student Avi Bakal saw the commercial opportunities and founded TriEye in 2016 with Omer Kapach as VP R&D and Levy as chief technology officer.

They attracted interest from high-profile investors such as Intel Capital, Marius Nacht (a cofounder of Check Point Software) and Grove Venture’s Dov Moran, inventor of the USB flash drive and TriEye’s chairman of the board. As of May, TriEye has raised $17 million.

The company is starting with a focus on the automotive industry, but its technology could work in other areas, including industrial, security and optical inspection. SWIR cameras can see things you can’t with your own eyes, even in bad weather or with obstructions.

TriEye showed ISRAEL21c a demo of its technology at the recent Ecomotion smart mobility conference in Tel Aviv.

A SWIR camera and a regular store-bought camera were set up to focus on a toy car. The images from both cameras were projected on screens above the demonstration. A piece of thick white cardboard was then placed in front of the cameras. The regular camera went blank, but the SWIR camera still showed the car – a little blurry but clearly visible.

TriEye pairs the high resolution of its SWIR camera with artificial intelligence algorithms.

“The AI can easily understand whether it’s seeing a car, a truck or a pedestrian,” Livne says. “We don’t have to drive around and collect millions of images in order to re-annotate them.”

Cameras for autonomous vehicles have become something of a cottage industry in Israel. ISRAEL21c has written about several of these companies.

Innoviz makes laser-based LiDAR (“light detection and ranging”) cameras for self-driving cars. Oryx Vision uses micro-antennas to detect light waves as a higher-end alternative to LiDAR. Autotalks can send a collision alert message around a corner to another car or motorcycle when there’s no image possible. Vayyar uses sensors instead of cameras to reduce potential crashes.

And then there’s Mobileye, Israel’s grandfather of cameras for cars, with its ubiquitous beeps warning drivers when they’re getting too close to the next vehicle.

What makes TriEye better than the competition? “We don’t like to say we’re better than this one or that one. All the sensors are important,” Livne replies.

However, he continued, “For the problem we’re solving – the low-visibility challenge – the sensors we have today don’t get enough resolution and contrast and understanding of the scene to make reliable driving decisions.”

That wasn’t the problem in Tempe when that self-driving Uber killed Elaine Herzberg as she was pushing a bicycle across a four-lane highway. The weather was clear and visibility was fine.

Uber had deactivated the car’s emergency braking system to make for a smoother ride, and the car’s software – which noticed Herzberg a full six seconds before impact – malfunctioned and read her shape as benign. Even worse, the human “backup” driver was not watching the road.

But it is true that low visibility and bad weather account for 21 percent of vehicle crashes in the US – a total of 1.2 million collisions per year. If TriEye can play a small part in bringing that number down, Livne will be satisfied.

“We like to wake up in the morning and feel like we’re actually saving lives,” he says.

The company aims to release its product to the market by 2020. For more information click here.