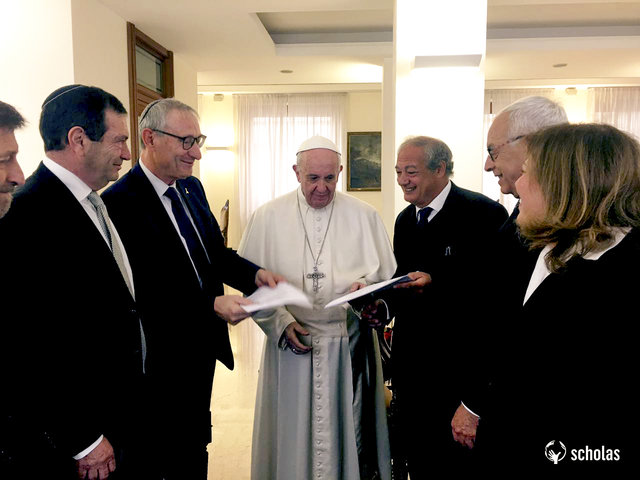 40 Palestinian and Israeli youth, together with youngsters from the five continents will meet the most important religious and academic referents from 41 universities of 19 countries

Summit co-organized by the Pontifical Scholas Occurrentes and the Harry S. Truman Research Institute for the Advancement of Peace, at the Hebrew University of Jerusalem

Jerusalem, June 29, 2017 — From July 2-5, 2017, an unprecedented gathering of educators, religious leaders and students from around the world will take place in Jerusalem, in a summit co-organized by the Pontifical Scholas Occurrentes and the Harry S. Truman Research Institute for the Advancement of Peace, at the Hebrew University of Jerusalem.

This encounter promoted by Pope Francis (link to the news: http://new.huji.ac.il/en/article/33423) will feature a meeting of academicians, scientists and religious leaders from across the world, along with peace and trust-building activities involving youth from the three Abrahamic religions. Over 150 international specialists are expected to take part in the summit, including Israelis, Palestinians, and representatives from Africa, Latin America, Europe, and North American and Asia.

Palestinian and Israeli students will meet youth from Spain, Mexico, Argentina, Kenya, Burundi, Congo, and Brazil, among others, who will attend the summit. The 75 Jewish, Christian and Muslim youth from around the world will live a learning experience through sports, arts and technology and will interact with academics and the main religious referents.

At the opening ceremony, young people will express their deepest feelings through the arts and together they will say an interreligious prayer for peace. After intensive working days where academic experiences of dialogue and encounter will be shared, the closing ceremony is expected to include greetings to the participants from the Holy Father, Pope Francis, together with the planting of a traditional olive tree for peace.

“Religion can bring us together and teach us to create the bonds of friendship. With the intuition of Scholas and the intelligence and history of the Hebrew University, I am sure that this will produce great changes in the world,” said Pope Francis.

Scholas Occurrentes (http://web.scholasoccurrentes.org/en) is an international educational organization created and erected by Pope Francis when he was Archbishop of Buenos Aires. Once elected Pontiff, the program was adopted as a global youth project of the Vatican, to educate young people in the commitment for the common good.

The Truman Institute (http://truman.huji.ac.il) is the first and largest research institute in the Middle East to examine conflict resolution and propose peaceful solutions for the region. The Institute fosters understanding, discussion and debate on the challenges facing Israelis and Palestinians and the citizens of the developing world.