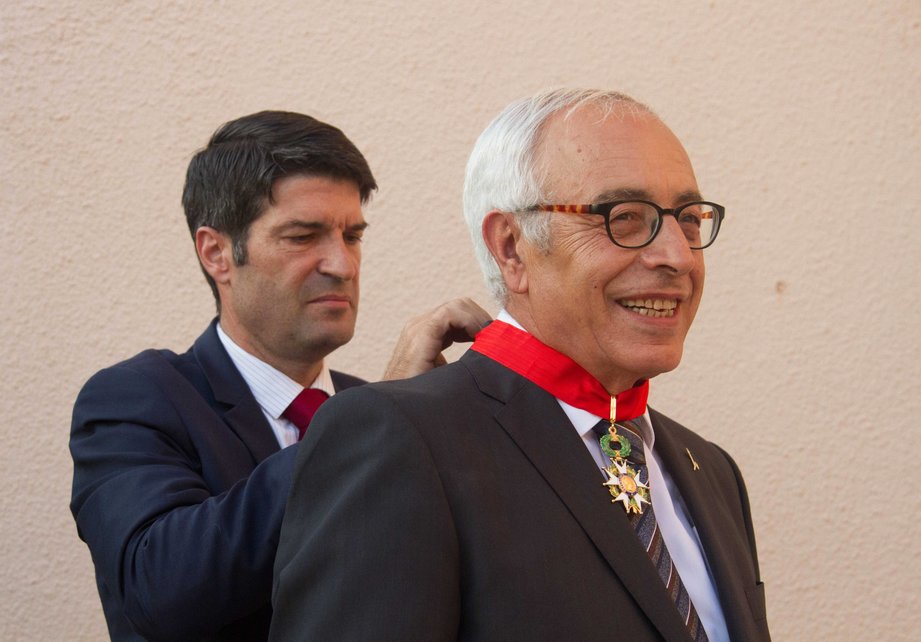 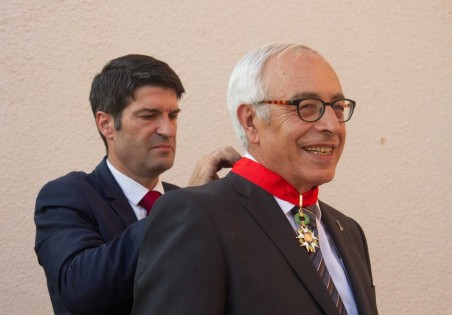 Mr. Patrick Maissonave, the Ambassador of France to Israel, presents the medal of the Legion of Honour to Yossi Gal, Vice President of the Hebrew University of Jerusalem and former Israeli Ambassador to France. (Photo credit: French Embassy in Israel / Marine Crouzet)

Jerusalem, June 29, 2016 — Ambassador Yossi Gal, the Vice President for Advancement and External Relations at the Hebrew University of Jerusalem, has been named a Commander of France’s Legion of Honour. The honour was presented at a ceremony hosted by Mr. Patrick Maisonnave, the Ambassador of France to Israel, at his official residence in Tel Aviv yesterday.

Established by Napoléon Bonaparte in 1802, the Legion of Honor (Ordre national de la Légion d’honneur) is the highest French order for military and civil merits.

“As Vice President of the Hebrew University, an institute which was a home to Einstein, Freud, Buber, Bialik and Chaim Weizmann, I appreciate even more today France’s contribution to the world of sciences — mathematics, medicine, literature and culture,” said Ambassador Yossi Gal.

“Through and beyond your daily routine as Ambassador, you, dear Yossi, were a privileged witness to the solid, multi-faceted and passionate nature of Franco-Israeli relations,” said Mr. Patrick Maisonnave, the Ambassador of France to Israel. “First and foremost, it is a solid relationship: France is a central ally to Israel since the days it voted in favor of the Partition Plan of 1947, and since the establishment of the State of Israel which we were among the first to recognize. Secondly, this is a multi-faceted relationship, which was built around the strong human relations we share. It is built around the growing interest of French economic players in the Israeli market and in the dynamism of Israel for innovation, the increasing exchange of information between our universities, the success of Israeli literature and Israeli cinema in France, and Israelis who are interested in French culture. Finally and especially, French-Israeli relations are passionate: France holds a special place in the Israeli imagination, and Israel in the French imagination. This passion is accompanied by mutual concerns about the future of our friend. You were an outstanding player in this great friendship between France and Israel, dear Yossi Gal, and so in the name of the President of the Republic, and the under the authority granted to me, we present you the Medal of Commander of the Legion of Honour.”

“The Hebrew University is the leader in higher education in Israel, and one of the most important universities in the international arena,” added Ambassador Gal. “I am honoured to represent Israel’s best university around the world and contribute to its success.”

Born in Jerusalem, Ambassador Gal completed his elementary and high school studies in Jerusalem and graduated from the Hebrew University. Following his military service and university studies, in 1975 he began his career in the foreign service of the State of Israel.

Among his many posts at the Ministry of Foreign Affairs, he served as Director of the Information Department, Deputy Director-General for Communications, participated in the peace negotiations with Israel’s neighbors, and chaired the Israeli delegation to the multilateral peace talks on the environment.

Ambassador Gal participated in the Madrid Peace Conference, was a member of the peace negotiating team with Jordan and the Palestinians, headed the diplomatic process of Israel’s adherence to the OECD, and led the negotiations on upgrading relations with the EU.