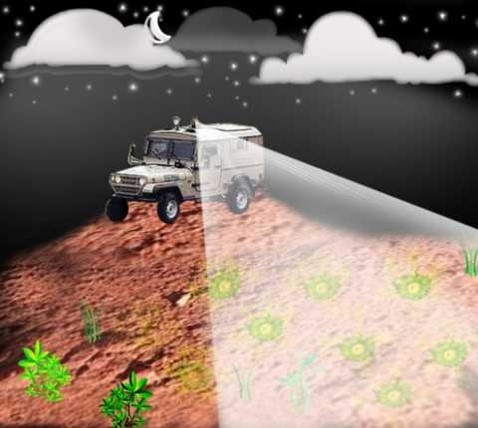 The need for safe and efficient technologies for detecting buried landmines and unexploded ordnance is a humanitarian issue of immense global proportions. About half a million people around the world are suffering from mine-inflicted injuries, and each year an additional 15 to 20 thousand more people are injured or killed by these devices. More than 100 million such devices are still buried in over 70 countries.

The major technical challenge in clearing minefields is detecting the mines. The technologies used today are not much different from those used in World War II, requiring detection teams to risk life and limb by physically entering the minefields. Clearly, there is a critical need for an efficient solution for the remote detection of buried landmines and unexploded ordnance.

Researchers from the Hebrew University of Jerusalem now report a potential answer to this need. Writing in the journal Nature Biotechnology, they present a novel, functional system combining lasers and bacteria to remotely map the location of buried landmines and unexploded ordnance.

The system is based on the observation that all landmines leak minute quantities of explosive vapors, which accumulate in the soil above them and serve as markers for their presence. The researchers molecularly engineered live bacteria that emit a fluorescent signal when they come into contact with these vapors. This signal can be recorded and quantified from a remote location.

The bacteria were encapsulated in small polymeric beads, which were scattered across the surface of a test field in which real antipersonnel landmines were buried. Using a laser-based scanning system, the test field was remotely scanned and the location of the buried landmines was determined. This appear to be the first demonstration of a functional standoff landmine detection system.

“Our field data show that engineered biosensors may be useful in a landmine detection system. For this to be possible, several challenges need to be overcome, such as enhancing the sensitivity and stability of the sensor bacteria, improving scanning speeds to cover large areas, and making the scanning apparatus more compact so it can be used on board a light unmanned aircraft or drone,” said Prof. Shimshon Belkin, from the Hebrew University’s Alexander Silberman Institute of Life Sciences, who was responsible for genetically engineering the bacterial sensors.

Research groups participating in this study at the Hebrew University were led by Prof. Shimshon Belkin at the Alexander Silberman Institute of Life Sciences (genetic engineering of the bacterial sensors); Prof. Aharon J. Agranat at the Department of Applied Physics and the Brojde Center for Innovative Engineering and Computer Science (design and construction of the remote scanning system); and Prof. Amos Nussinovitch at the Robert H. Smith Faculty of Agriculture, Food and Environment (bacteria encapsulation in polymeric beads).