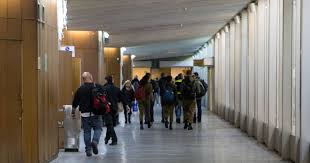 (Jerusalem, April 15, 2019)— The Hebrew University of Jerusalem (HU) has been tapped by Israel’s Ministry of Defense to run a prestigious academic program for its Israel Defense Forces’ (IDF) Intelligence Corps.  Havatzalot is a joint military-academic degree that provides intelligence officers with a Bachelors of Arts degree at the end of a 3-year program that includes officer training, leadership courses, and basic combat training. The B.A. portion of the Havatzalot program will begin this fall (October 2019) at Hebrew University.  Soldiers will do a double-major in Islamic & Middle Eastern studies and a major of their choosing—either Mathematics, Economics, Philosophy or Computer Science.

This is not the first time that HU is pairing up with the IDF.  HU currently runs a joint academic-military degree called Gamla.  In Gamla, outstanding career officers in IDF’s Intelligence Corps pursue a BA at Hebrew University.

Bracha Hertz, Deputy Director of Procurement for the Ministry of Defense: “The Havatzalot program is one of the most complex and important academic tenders that the Ministry of Defense has offered in recent years.  We’ve been careful to strike a delicate balance between military excellence and academic freedom.  I would like to thank the Council of Higher Education, which was a partner in this project, and to congratulate the Hebrew University for winning the tender.”

Prof. Asher Cohen, President of Hebrew University: “Being awarded the IDF’s Havatzalot tender testifies to Hebrew University’s high academic standard.  We look forward to partnering with the IDF to train Intelligence Corps soldiers and to strengthen their leadership and academic capabilities.”