Israeli Researchers: The People Behind the Greatest Breakthroughs 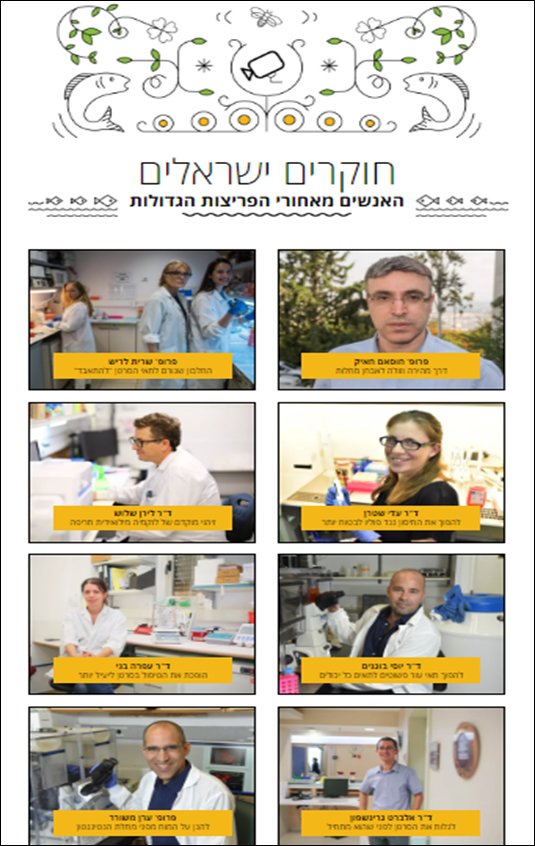 Of the 8 listed, Hebrew University had 4 individuals.

The following is a modified translation of an article that appeared on Walla in September 2017. https://roshhashana.walla.co.il/category.php?id=1049 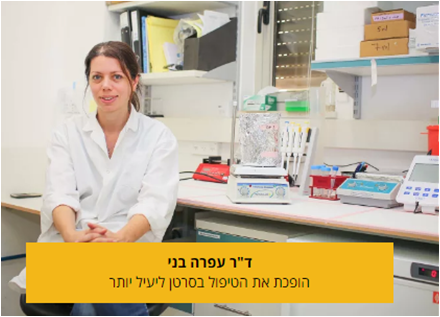 Dr. Ofra Benny’s research lab at the School of Pharmacy, the Institute of Drug Research and the Faculty of Medicine at the Hebrew University of Jerusalem, develops nanoscale drugs that directly target cancerous tumors, thereby increasing their effectiveness and reducing their side effects.
One of the main challenges in cancer therapy is how to deliver drugs defiantly and specifically to the tumor site, especially since there are huge differences between cancer types, stages and between patients. To overcome this difficulty, she and her research team are developing new approaches for designing drug carriers, that show better performance in the specific condition of the patient.This is done by taking into account not only the tumor itself, but also the tumor microenvironment, including the blood vessels that feed it. As part of her research, the lab is developing advanced technologies based on miniature microfluidic chips that allow the construction of nanometeric particles with special mechanical properties that allow better penetration into cancer tumors.
To test this practice, they are also developing methods to grow cancer tumors outside the body. For this purpose, malignant cells from patients are grown in the laboratory in a three-dimensional form, similar to what happens in the body. With that Benny’s lab hope to provide a new tool to predict drug activity before testing it in cancer patients, thus saving much unnecessary suffer from inefficient drugs. 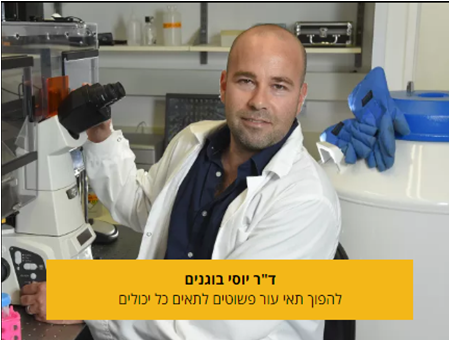 Dr. Yossi Buganim heads a stem cell laboratory at the Hebrew University Medical School in Jerusalem, and isinvolved in regenerative medicine – a new field that aims to replace damaged tissues, organs or cells by transplanting healthy cells that are derived from alternative sources of cells. For example, embryonic stem cells have tremendous potential in this fieldbecause they are able to become all types of cells in the human body. However, various ethical problems and cell rejection by the patient’s immune system prevent their actual use.
To overcome these obstacles, Dr. Buganim’s lab works to convert adult skin cells into cells with a high clinicalvalue, such as nerve cells, heart cells, and embryonic stem cells. These cells are referred to as “induced cells” and look and function just like their natural counterparts in the human body. By introducing a small number of proteins into skin cells, Dr. Buganimand his team reprogram the genome of the skin cells which are then converted into other cells of interest. Because the skin cells are taken directly from the patient him- or herself, issues with immune-rejection or ethics are no longer relevant.
The success of the study may lead to a new, unending source of cells that will be used for transplants. In addition, these cells are a good basis for the study of diseases and the discovery of drugs because they can be produced from different patients and diseases. 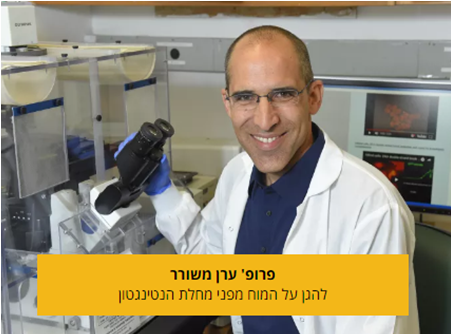 The laboratory of Prof. Eran Meshorer at the Hebrew University of Jerusalem studies epigenetics and embryonic stem cells, with an emphasis on the creation of neurons from embryonic stem cells, and the modeling of neurodegenerative diseases of the brain. In recent years, they have been able to create a type of nerve cell that degenerates and dies in Huntington’s disease, a genetic disease caused by a known mutation that causes brain degeneration at a relatively late age and ultimately death, just like in Parkinson’s or Alzheimer’s.

How did they do that? Prof. Meshorer and his team have deciphered the molecular pathways that are affected by the creation and examination of healthy nerve cells alongside nerve cells containing the mutation. The advantage of working with embryonic stem cells is the ability to create human tissue relevant to the disease, and to discover processes that occur long before the cells themselves die. If researchers succeed in blocking these processes, patients can be treated at very early stages of the disease.

Although stem cell transplantation has already begun in primates and humans with neurodegenerative diseases of the brain, the problem is very complex because of the enormous complexity of the brain. At the moment, according to Prof. Meshorer, the great power of using embryonic stem cells is mainly research, because “mini-brains” can be created by varying the three-dimensional cells into small structures reminiscent of human brain tissue and performing controlled experiments and thus helping in drug development. The same neurons or nerve cells can also be used to test drugs, thereby greatly shortening the process. 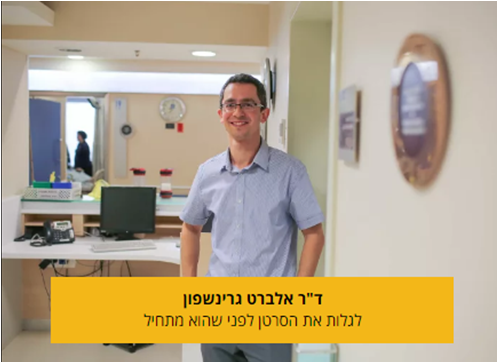 A liquid biopsy is a blood test that gives a glimpse into the biology of the tumor without the need for invasive biopsies or radiation-emitting tests such as CT or PET. Despite the great advances in the field and the introduction of this technology, there are still many questions about the effectiveness of this method in disease monitoring, the choice of treatment, and even early detection. The goal of Albert Grinshpun’s research, a doctor of medicine at the Oncology Institute of Hadassah Medical Center, is to quickly transfer the technology from the laboratory to the patient, in order to enable rapid development and advancement of the methods for the benefit of the patients.
Dr. Grinshpunand his colleagues try to decipher what is happening in the blood of patients on the assumption that the blood provides an accessible and reactive view of the tumor, thus enabling an understanding of its biology and then adapting the treatment. In addition, they examine the blood components of people without cancer but are at an increased risk of developing it (for hereditary reasons such as BRCA mutations) in an attempt to develop early detection and diagnostic methods that will prevent future disease and suffering.
The aim of the study is to identify early signs in a blood test of the development of precancerous lesions and prevent their progression to disease. In cases where a disease is already present, blood tests can guide patient care on a daily basis and allow accurate and effective treatment to achieve the best medical outcome.