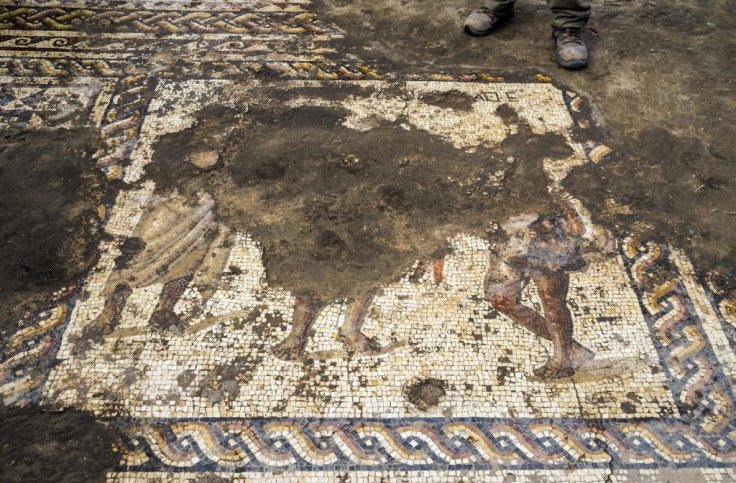 The ancient mosaic was discovered under a 1,500-year-old building, which was likely used as a place for gathering and socialising.
Archaeologists have unearthed a rare mosaic dating back to the Byzantine era in the ancient city of Caesarea, Israel. The colorful portrait, nearly 1,800 years old, depicts men wearing togas and a long mysterious writing that is still being studied.

Archaeologists have unearthed a rare mosaic dating back to the Byzantine era in the ancient city of Caesarea, Israel. The colourful portrait, nearly 1,800 years old, depicts men wearing togas and a long mysterious writing that is still being studied.

The mosaic, comparable to the finest artistic discoveries in Israel, was found when Caesarea National Park, a prime tourist attraction in the region, was excavated as part of a massive project aimed at reconstructing a Crusaders-era bridge.

The effort, jointly undertaken by Caesarea Development Corporation and Israel Nature and Parks Authority, uncovered part of a 1,500-year-old building. The archaeologists believe this was likely an Agora or a place where people used to gather and socialise, the Jerusalem Post reported.

Under this building, they discovered the colourful mosaic. The group believes it was part of another site, possibly a mansion, even older than the structure sitting on top of it.

The ancient mosaic, measuring 3.5 by 8 metres, shows three toga-clad men standing next to each other, heavily detailed geometric patterns created with thousands of tiny stones, and an ancient Greek text, which is way too damaged to be read and understood, according to the Times of Israel.

“The central figure is frontal, and the two others face him on either side,” Peter Gendelman and Uzi ‘Ad, the directors the excavation, said while describing the ancient trio. It remains unclear who these men were but the duo believes they belonged to a higher class of people from that time. 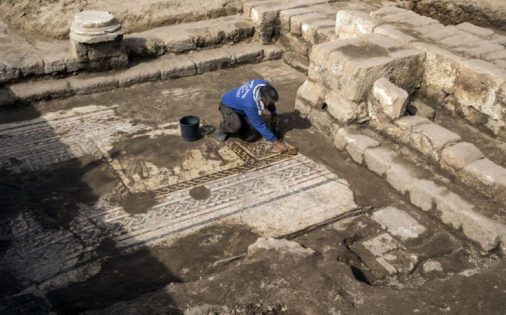 According to the archaeologists, if the mosaic was part of a mansion, the men could have been its owners or if it were a public building, they could have been those who donated the portrait, or members of the city council.

As for the mysterious writing, archaeologists can only see a few letters of what appears to make up a long, multi-word inscription.

They have got a preliminary analysis from Hebrew University epigrapher Leah Di Segni but she would need more information from the site to get to the exact translation. “It is very hard to read the inscription, for lots of letters are missing and many of those that are not, are unclear,” she told the Times of Israel.

The group is now working to preserve the mosaic to prevent it from any further damage and is also re planning the bridge project to make the discovery more accessible to tourists. 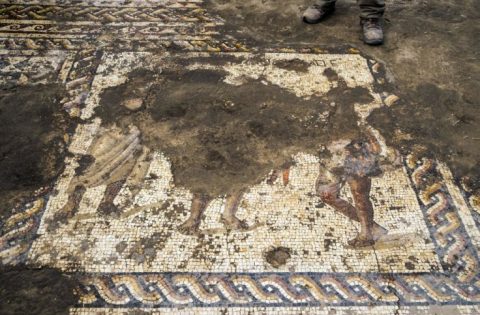