Jerusalem, September 13, 2016 — A delegation of Asian religious leaders visited the Hebrew University of Jerusalem today to hold a day of discussions at the Harry S. Truman Research Institute for the Advancement of Peace. The leaders met with their Israeli counterparts from religion and academia to exchange ideas on issues ranging from the advancement of peace to the protection of environment.

The meeting opened with a prayer and meditation session, followed by discussions about safeguarding the ecology of planet earth in the industrial age, and the role of religious leadership in peacemaking.

Bawa Jain, Secretary General of the World Council of Religious Leaders, said: “Participants in this conference are leaders of forty percent of the world’s population, with over three billion followers. That this day took place, and at the Truman Institute, is natural because the Institute is a meeting place where politics, religion and culture come together.”

The meeting was part of “Ancient Traditions, Contemporary Realities: A Meeting of Israel-Asia Faith Leaders,” a first-of-its kind conference organized by the Israeli Foreign Ministry, the American Jewish Committee and the World Council of Religious Leaders. 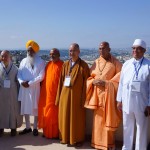 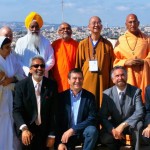 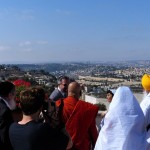