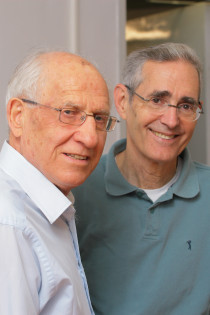 Jerusalem, September 7, 2016 — Columbia University has announced that its top honor for achievement in biological and biochemical research will be awarded to two researchers from the Hebrew University of Jerusalem and a colleague from the United States.

The 2016 Louisa Gross Horwitz Prize will be presented to Prof. Howard Cedar and Prof. Aharon Razin of the Hebrew University’s Faculty of Medicine, and Dr. Gary Felsenfeld of the National Institutes of Health.

The researchers will be awarded for their fundamental work on how molecules regulate the structure, behavior, and activity of DNA without modifying its genetic code. Their research has yielded key insights into how cells and embryos develop, and led to the formation of a new field of biology called Epigenetics.

Among the innovations attributed to Profs. Cedar and Razin is the concept of epigenetic reprogramming, a key process in development that erases and re-establishes the ability of cells to transform into different types.

The awards ceremony will be held in New York on November 22, 2016, following the 2016 Louisa Gross Horwitz Prize Lectures. The Columbia University announcement is at http://newsroom.cumc.columbia.edu/?p=37120.

Howard (Chaim) Cedar is an emeritus professor of molecular biology, and the Edmond J. Safra Distinguished Professor (Emeritus), at the Hebrew University of Jerusalem’s Faculty of Medicine.

Aharon Razin is an emeritus professor of biochemistry, and the Dr. Jacob Grunbaum Chair of Medical Science (Emeritus), at the Hebrew University of Jerusalem’s Faculty of Medicine.

“These three scientists have advanced our understanding of how gene regulation works and what happens when the processes go wrong,” said Lee Goldman, MD, Harold and Margaret Hatch Professor of Columbia University, dean of the Faculties of Health Sciences and Medicine, and chief executive of Columbia University Medical Center. “These are fundamental medical discoveries that may lead to innovative treatments for a range of diseases.”

“These researchers laid the foundation for an important new field of study,” said Gerard Karsenty, MD, PhD, chair of the Horwitz Prize Committee and chair of the Department of Genetics and Development at Columbia University Medical Center. “As our cells divide and become more specialized they need instructions on which genes to use and which to ignore. Epigenetics adds these annotations to our biological textbook; it’s a process that is crucial to our development and continues throughout our lives.”

The Louisa Gross Horwitz Prize was established under the will of the late S. Gross Horwitz through a bequest to Columbia University. It is named in honor of the donor’s mother, Louisa Gross Horwitz, who was the daughter of Dr. Samuel David Gross (1805–89), a prominent Philadelphia surgeon who served as president of the American Medical Association and wrote Systems of Surgery. For more information, please see the Columbia University website at http://www.cumc.columbia.edu/research/horwitz-prize.

About the Hebrew University’s Faculty of Medicine
The Hebrew University’s Faculty of Medicine is a comprehensive training and research institution. Its mission is to educate Israel’s finest medical personnel and deliver biomedical research breakthroughs that alleviate human suffering and improve healthcare throughout the world. The Faculty encompasses five schools: in addition to the Hebrew University-Hadassah Medical School, the Schools of Pharmacy, Nursing, Occupational Therapy and the Braun School of Public Health and Community Medicine provide the training that enable graduates to deliver the highest standards of research and treatment in Israel and around the world. At two major Institutes, the Institute for Medical Research Israel-Canada (IMRIC) and the Institute of Drug Research, the Faculty of Medicine conducts fundamental and applied research essential to understanding and finding therapies for the illnesses that challenge medical science, among them cancer, cardiovascular disease, diabetes, neurodegenerative diseases, and infectious diseases. For more information, visit https://medicine.ekmd.huji.ac.il/En.