Jerusalem, November 3, 2016 — The Governor General of Canada, David Johnston, and his wife Sharon Johnston visited the Hebrew University of Jerusalem’s Faculty of Medicine today. The 28th Governor General of Canada, and the first to make a state visit to Israel, Johnston was accompanied by a delegation that discussed collaborative medical research partnerships between Canada and Israel.

The delegation visited IMRIC, the Institute for Medical Research Israel-Canada — one of the most innovative biomedical research organizations worldwide, bringing together Canadian and Israeli scientists to find solutions to the world’s most serious medical problems through a multidisciplinary approach (www.imric.org).

The President of the Hebrew University, Prof. Menahem Ben-Sasson, welcomed The Governor General and Mrs. Johnston, saying: “When you travel abroad you want to feel at home, and here at the Hebrew University’s Faculty of Medicine you can feel right at home. At the Institute for Medical Research Israel-Canada, Canadians are directly involved in the translational medicine taking place here. Together, Israel and Canada are translating science into medicine and, ultimately, healing the world.”

Governor General Johnston replied, “You greeted us by saying ‘Welcome home,’ and you explained why: the common ground we have, and the sharing of knowledge. The diplomacy of knowledge is very enabling, and that is what we celebrate at an institute like this, a Canada-Israel institute of medicine.”

Prof. Haya Lorberboum-Galski, Chair of the Institute for Medical Research Israel-Canada, described the numerous collaborative medical research partnerships between Canada and Israel taking place at the Institute for Medical Research-Israel Canada. Among these are the Alex U. Soyka Pancreatic Cancer Research Project ; the Joseph and Wolf Lebovic Cancer Genomics and Immunotherapy Program; the Canada-Israel International Fetal Alcohol Syndrome Consortium ; and a collaboration with the Montreal Neurological Institute. Prof. Abraham Fainsod and Prof. Ehud Cohen then described their research into Fetal Alcohol Spectrum Disorder and Alzheimer’s Disease, respectively.

Sharon Johnston Holds Round-Table Discussion with Early Childhood Program and HIPPY Israel Leaders:
On Wednesday, Sharon Johnston visited the National Council of Jewish Women Research Institute for Innovation in Education to meet with leaders of various Early Childhood Programs. As honorary patron of HIPPY (Home Instruction for Parents of Preschool Youngsters) Canada (http://hippycanada.ca/wordpress), she met with leaders of the HIPPY Israel program (http://hippy-international.org/israel) to learn about services offered by the organization. She heard from several mothers who said that participating in HIPPY has helped them become more effective parents, and she discussed common challenges, lessons and experiences among the Canadian and Israeli programs.

HIPPY Israel and its sibling early childhood programs serve some 3,000 families among Israel’s native-born Arab and Jewish communities and immigrant communities from Ethiopia, Eastern Europe and Central Asia. Operating in over 70 sites, HIPPY Israel is part of the government’s New Beginnings initiative designed to extricate preschoolers and school-age children from risk and poverty. The Ministry of Education, education and social services departments of local authorities and the Hebrew University of Jerusalem all contribute to the operation of HIPPY in Israel. Founded in the late 1960s, HIPPY Israel is the most veteran of all HIPPY programs worldwide (http://hippy-international.org), which are dedicated to the principles of equal educational opportunity and social inclusion, working with communities and families who face socio-economic challenges, helping parents and carers to nurture children’s readiness for school and their motivation to reach their highest potential.

The visits to the Hebrew University come in the context of forging greater ties between Canadian and Israeli innovation and educational institutions. Prior to visiting Israel, the Governor General wrote in an op-ed, “We are looking beyond our borders for ideas and innovation – and what better place to look than Israel, a leader in new ideas and innovative thinking. We have much to learn from each other.” 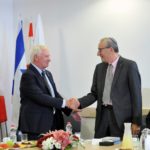 Hayat Abd Elhak, an instructor for the past 18 years in the HIPPY Israel program, presents Mrs. Johnston with a bracelet she made for her, inscribed with the Hebrew University early education programs’ motto, “From Birth to University.” “I will wear this to the state dinner tonight,” said Mrs. Johnston. (Photo: Dov Smith/Hebrew University) 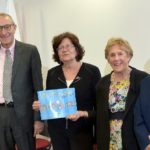