Researchers at the Hebrew University in Jerusalem have developed a new and unique material that can bind the radioactive isotope Caesium-137 in water, thereby purifying it. 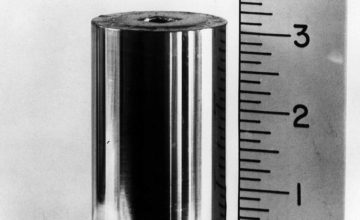 This toxic isotope appeared after the nuclear explosion in Chernobyl in 1986, and the nuclear disaster in Fukushima in 2011. The new material is efficient, easy to prepare and does not require a large financial investment.

One of the major problems with radioactive materials is pollution of soil and water with radioactive waste. This waste emits dangerous radiation even in minimal amounts, and its treatment is complicated and costly. Caesium-137 is able to be absorbed in bones and muscles.

In fact, only half of the material will break down after 30 years, continuing to be a dangerous pollutant that emit radiation for decades. Cesium salts, such as sodium and potassium, are highly soluble in water and do not tend to react with many substances, which makes it difficult to purify water from cesium contamination.

There are some chemicals that can bind cesium salts from aqueous solutions and sink them, but these are expensive and their use is limited.

The Hebrew University researchers were able to develop a new substance that can bind cesium ions in water, and as a result sink them into a non-soluble and stable complex. The results of the study show that the new material can be mixed with cesium-contaminated water, filtered from the sediment containing the contamination and thus become purified.

Prof. Almog describes the new material: “For about a decade, we have been studying a group of substances which are able to bind different ions and salts. In the framework of the study, a large variety of them was prepared and their characteristics were studied, especially their potential in the field of analytical chemistry.”

“The molecule of one of these, known as the Alloxan Tray, included an unknown spatial array of six carbonic groups, which, according to their spatial location, we expected to correspond exactly to the binding of cesium ions, which are the largest single-atom ions,” Prof. Almog explained.

“Indeed, the Alloxan tray reacted with cesium ions in aqueous solutions and formed an insoluble complex with them that sank out of the solution and could be easily separated,” he said, stressing that “beyond the successful sedimentation of cesium ions, the new compound has a significant advantage – ease of preparation. The Alloxan tray can be prepared with high utilization of available, inexpensive materials.”

As originally published in the JewishPress.com by David Israel – January 28, 2019