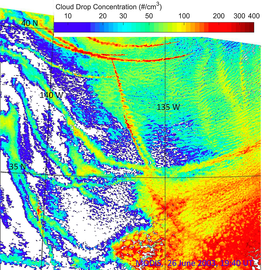 We Need to Rethink Everything We Know About Global Warming, says Hebrew University Researcher

(Jerusalem, January 17, 2019)—For a while now, the scientific community has known that global warming is caused by manmade emissions in the form of greenhouse gases and global cooling by air pollution in the form of aerosols. However, new research published in Science by Hebrew University of Jerusalem Professor Daniel Rosenfeld shows that the degree to which aerosols cool the earth has been grossly underestimated, necessitating a recalculation of climate change models to more accurately predict the pace of global warming.

Aerosols are tiny particles that float in the air. They can form naturally (e.g., desert dust) or artificially (e.g., smoke from coal, car exhaust). Aerosols cool our environment by enhancing cloud cover that reflect the sunlight (heat) back to space.

As for the first, clouds form when wind rises and cools. However, cloud composition is largely determined by aerosols. The more aerosol particles a shallow cloud contains, the more small water droplets it will hold. Rain happens when these droplets bind together. Since it takes longer for small droplets to bind together than it does for large droplets, aerosol-filled or “polluted” clouds contain more water, live in the sky longer (while they wait for droplets to bind and rain to fall, after which the clouds will dissipate) and cover a greater area. All the while, the aerosol-laden clouds reflect more solar energy back into space, thereby cooling the Earth’s overall temperature.

To what extent do aerosols cool down our environment? To date, all estimates were unreliable because it was impossible to separate the effects of rising winds which create the clouds, from the effects of aerosols which determine their composition. Until now.

Rosenfeld and his colleague Yannian Zhu from the Meteorological Institute of Shaanxi Province in China developed a new method that uses satellite images to separately calculate the effect of vertical winds and aerosol cloud droplet numbers. They applied this methodology to low-lying cloud cover above the world’s oceans between the Equator and 40°S. With this new method, Rosenfeld and his colleagues were able to more accurately calculate aerosols’ cooling effects on the Earth’s energy budget. And, they discovered that aerosols’ cooling effect is nearly twice higher than previously thought.

However, if this is true then how come the earth is getting warmer, not cooler? For all of the global attention on climate warming, aerosol pollution rates from vehicles, agriculture and power plants is still very high. For Rosenfeld, this discrepancy might point to an ever deeper and more troubling reality. “If the aerosols indeed cause a greater cooling effect than previously estimated, then the warming effect of the greenhouse gases has also been larger than we thought, enabling greenhouse gas emissions to overcome the cooling effect of aerosols and points to a greater amount of global warming than we previously thought,” he shared.

The fact that our planet is getting warmer even though aerosols are cooling it down at higher rates than previously thought brings us to a Catch-22 situation: Global efforts to improve air quality by developing cleaner fuels and burning less coal could end up harming our planet by reducing the number of aerosols in the atmosphere, and by doing so, diminishing aerosols’ cooling ability to offset global warming.

According to Rosenfeld, another hypothesis to explain why Earth is getting warmer even though aerosols have been cooling it down at an even a greater rate is a possible warming effect of aerosols when they lodge in deep clouds, meaning those 10 kilometers or more above the Earth. Israel’s Space Agency and France’s National Centre for Space Studies (CNES) have teamed up to develop new satellites that will be able to investigate this deep cloud phenomenon, with Professor Rosenfeld as its principal investigator.

Either way, the conclusion is the same. Our current global climate predictions do not correctly take into account the significant effects of aerosols on clouds on Earth’s overall energy balance. Further, Rosenfeld’s recalculations mean fellow scientists will have to rethink their global warming predictions—which currently predict a 1.5° to 4.5°-degree Celsius temperature increase by the end of the 21st century—to provide us a more accurate diagnosis—and prognosis—of the Earth’s climate.